Posted on February 29, 2012 by malloryguinee

We left Segou early on Sunday morning, and as I said, I wasn’t feeling too good about it. It’s funny how fixated I can get on places. I’d been looking forward to Pays Dogon for weeks and in seconds I forgot about it as I lamented leaving Segou. The drive was long…so long. We stopped for a little picnic around 1:00 and feasted on hard boiled eggs, sardines, bread, and sodas. I’d never tried sardines, my father loves them, eats them on crackers for lunch when he can. I somehow always equated them with anchovies and refused when he offered to share. I regret that now – they were super tasty, though that could have also been because I was really really hungry. As we started out, my car had a problem. An “Oh look! Some smoky fume-y stuff is coming in through the AC unit.” moment. An “I am NOT going to die of carbon monoxide (of all things) in Mali today,” moment. We turned off the AC after that. It was a long ride, but thankfully after a while, as we got closer to Mopti, the air cooled some. The landscape was spectacular – truly rugged and absolutely beautiful. I made sure to look out the window from then on.

We stopped briefly in Mopti for gas and some snacks. I didn’t realize how crazy it was at first, but our gas station was SO much like what you’d find in the States. Unusually so, equipped with a service station filled with snacks. Emilia and I snagged some juice (apple – a rarity here), some cookies and some sour cream and onion Pringles. I feel a little guilty about how much I enjoyed those – they’re one of my guilty loves in the States, and to someone who’s been munching just Malian food for months, they were heavenly. Not that Mali food isn’t marvelous – it is, but the taste of home was very welcome.

It started to get dark after that, and then we turned off the paved road onto a rocky path up the cliff. It looked – in all honesty like the start of a horror movie. Oddly shaped trees and rocks, abandoned motos on the side of the road, men walking alone on the path, little lights in the distance. I loved it, craned my neck to check out the architecture in the towns we drove through. Then I realized, if that was the commencement of a horror flick, I’d be the first to die. I’d be that girl, the one who’s running around, looking at everything and chatting excitedly until I suffered some mysterious and horrible death. I’d be the warning to all others – leave the stuff alone, lock your doors, stick together, and pray you survive. It’s always good to have moments of self-discovery.

The route got worse as we continued, and as it got worse, our car sounded worse. It sounded horrible, in fact. Like it was going to keel over and die any second. And finally, as we tried to maneuver, the sand caught us. We were totally stuck, couldn’t move forwards or backwards. We weren’t as bad as Cherif’s car though, a few meters away, it was up to its bumper in sand. We had to get out, stand and watch as the chauffeurs tried to push it out. I didn’t know whether to laugh or cry – it was close to 11:00, I hadn’t had dinner, and our cars were stuck in the desert. In the end we were transported to the hotel in a working car. The chauffeur drove like a madman – fast, crazy. I now think I know what it feels like to be in a car chase scene in a movie. But we made it okay, ate dinner, and by the time we were finished they had miraculously freed the two cars and all was well. 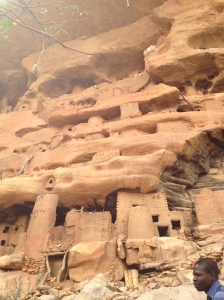 The next day, we took a hike to the top of the cliffs and down the other side. It was beautiful, magical. We got to visit 3 different villages, see the countryside, view the dwellings in the cliff sides up close. I was totally exhausted by the end, but I loved every second of it. Well, save the last few. We had been told that some guys would help us carry our water and help us with the more technical parts of the climb. I was reluctant to hand over my water. As a former big hiker/backpacker, I have a certain pride about carrying all my stuff myself. But there was a moment when I needed both my hands, and one of them took my water bottle, and only gave it back so I could drink, before reclaiming it. It was, in a guilty way, kind of nice. And he was sweet, offering me his hand when the going was tricky, carrying my bottle on his head to make me laugh. Anyway, most people had similar 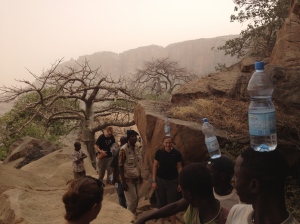 experiences, and for those who haven’t climbed/hiked much, these guys were saviors. At the bottom, however, things got ugly. We had been told that Cherif would pay for their services, but these guys didn’t wait long before they began to demand money from all of us. Some acquiesced, handed over 2000 francs or so, others had to endure the angry glares of their unpaid guides. Mine, thankfully, did NOT ask for cash and I escaped into a car pretty fast, but it was stressful for everyone else, and not a good final note for the hike. 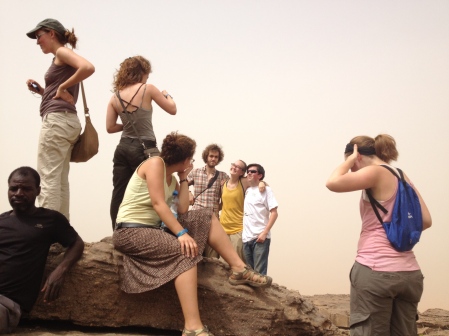 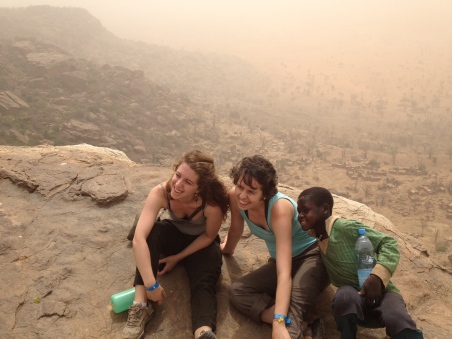 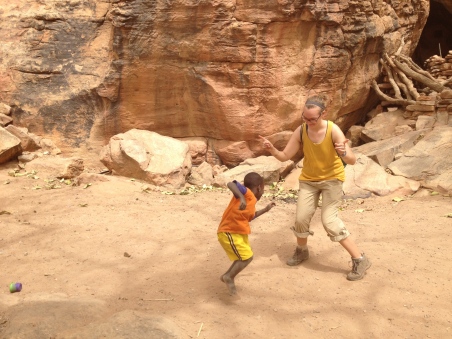 Caley playing with a young boy who joined us on the hike.

After a quick lunch, and a nice nap, we headed down to visit a local sculptor. His work 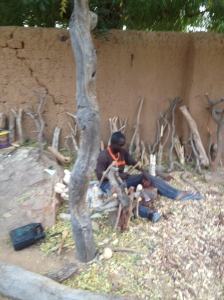 reminded me a lot of Dolo’s and I chatted with him for a while about his practice, what materials he used, what exhibitions were like, etc. It was really cool for me, and he was very nice, so I really enjoyed our afternoon and stayed at his shop for a couple hours.

We packed everything up the next morning and, after breakfast, settled ourselves in the cars. We stopped briefly at a small town where some people bought some thing’s before we left. These towns make me sad. Cherif told us that over the years, these towns have become accustomed to tourism, that their hotels are full to bursting and many people began to make their livelihoods on selling souvenirs to tourists. Now, with the problems in the North and the swiftly advancing desert, people hardly ever visit, and these vendors grow desperate. For me, this produced a constant mix of emotions – I was irked at being bugged, pressured constantly to buy some small idol or necklace but I also understood, and felt sad for these poor people who are going to have to rethink their lives if all this continues. Apparently the sand was never as bad as this year – some cars briefly got stuck, but it was never a big deal. Not the case for us.  Even though we took a different route leaving, two cars got seriously stuck, and needed serious work to get moving again. Guess which two? Cherif’s and…you guessed it, mine! I think Emilia and I were cursed on this trip – we even chose a different car, but we still got stuck. It was pretty ridiculous. So, anyways, Rick Perry, I think climate change is really a thing, you know, now that I’ve actually seen PROOF of the advancing desert, I think it’s a pretty safe bet.

We stopped at two more towns before quitting Pays Dogon. The first, was a small village where we watched a Dama, or Dogon masquerade. Now, I’ve had mixed feelings about this for a while. On the one hand, the Dogon are known and celebrated for the Dama, it’s spectacular – one of the oldest and best preserved traditions in the world. On the other, however, is the fact that this dance was NEVER supposed to be seen by Western viewers. Tourism has changed all of that. It’s kind of sad, one of their most sacred traditions has become an act for curious Western viewers. Part of me wanted to refuse to watch it, on principle, out of respect for what this was. Another part of me, however, wanted to see it – to experience this marvelous show, cited as performance art now in African Art textbooks. I wanted to see them move, to see one of the most memorable things I studied last term. Of course I did see it, and of course it was incredible. These men are amazing, the way they move, with those heavy masks blows my mind. The Dama is, truly, something you will never fully understand until you see it – and even then you won’t really get most of it. It was incredible though, even with the twinge of guilt I felt, the anger at all the Westerners who stole this tradition. 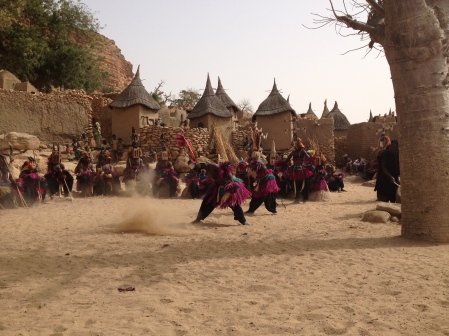 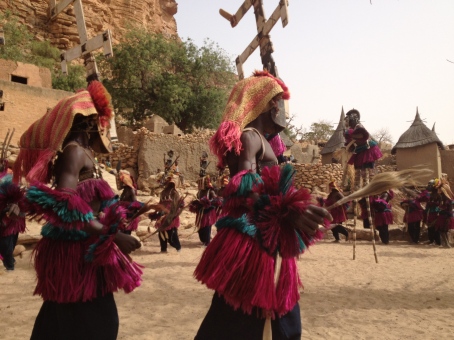 Our last stop was Bandiagara – a larger city, where we lunched at a very nice hotel. It was 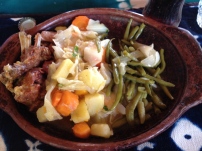 filled with toubabous which, as always, was kind of weird, but we got a marvelous meal and I saw a parrot (!) amongst the foliage. So that was cool.

All in all, Pays Dogon was interesting, mystifying, and made me feel very conflicted. It raised a lot of really interesting questions for me, questions that I will undoubtedly ponder for a very long time. And for that, I am very grateful.