Posted on February 26, 2012 by malloryguinee

We next visited one of the festival’s main sites and saw that the “Festival sur le Niger” is, in fact, on the Niger. By which I mean that the stage is in the water and has to be accessed by a boat that’s parked at its side. We snapped a few quick photos and hung out talking with people for a while before heading back. Even though music hadn’t started yet (all music at this venue is in the evening and it boasts all the main attractions) it was still insanely busy, dancers milled about and performed for tourists, Tuaregs wandered offering to sell jewelry, and musicians climbed out of cars with heavy instruments. I even saw the calabasse player who accompanied Habib Koité. He remembered us (we are somewhat conspicuous I suppose) and chatted with a few of us, telling about how he was playing with another artist named Mariam Koné later that afternoon. (She’s another artist you should check out – she heads an acoustic group in Bamako and their music is great.)

After a very yummy lunch at the hotel, we met a Carleton alum who was visiting the festival. He’s now an ethnomusicology professor and told us a little about his experience as an undergrad and after. He also plays the kora, and runs an ensemble at his university. I got his contact info, and now, thankfully have a resource back in the States.

Next, we headed out to see some of the afternoon’s performances. We two different women sing, and both were phenomenal, one’s music typically accompanied performances using huge puppets of fish, and the crowd loved it when they appeared during her performance. They were enormous, operated by men on the inside and the “swam” around in front of the stage for a bit. 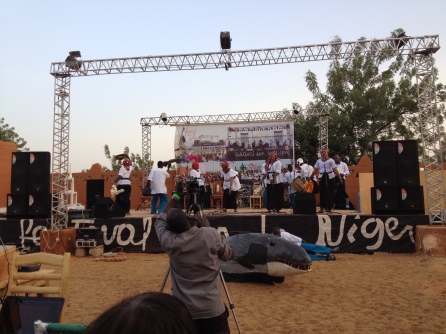 We hurried back to the hotel for a quick dinner and to clean up before the evening’s festivities. Cherif was feeling sick, so he and some students who felt tired ended up staying home. The concert was packed with people, and getting a spot near the stage was challenging. We fought our way through though, and were able to enjoy the music from a relatively close distance. I ended up retreating to further up, and watched the performance on one of the many screens projecting it after a while, as some Tuaregs were flirting with me, a real creeper was getting in my space, and I just felt kinda claustrophobic. I ended up running into the calabasse player again though, and we talked for a while, which was fun. We didn’t end up going home till 2am, and once we got there Somaila surprised me by saying “Discotheque?” So, after dropping some things off in our rooms, we hurried out again to another venue where a dj would be playing music till 6. Of course, they hadn’t started yet when we got there, so we heard another group play for a while before we started dancing. Once we did start though, we had so much fun. We were joined by some of Somaila’s friends – two girls who were working for the festival, and I had a blast dancing with one of them. She taught me a ton of new moves and laughed at me when I didn’t get them right. It was really fun, and I think all of us appreciated doing something a little crazy.

We slept in late the next morning, as those if us who went dancing stayed out till 5. Our day was mainly spent relaxing at the hotel, though we also watched part of a documentary on the Dogon country (our next destination). It was really interesting, but unfortunately the sound was terrible so it was difficult to understand. We next visited (briefly) the bogolan artisans, and all of us purchased a few more things for our friends and families at home. Then we washed up, and ate a delicious dinner of fish and veggies and cake (!) – it was Molly’s birthday – before piling in the car for the concert.

If I said the concert was packed Friday night, it was nothing compared to Saturday. We made sure everyone had phones before splitting up to explore/find spots. The place was packed. Also – I forgot to mention this earlier, but we saw more toubabous than we’d seen in the entire trip – combined. I’m pretty sure all the Peace Corps volunteers took the week off to come here. It was really strange to see them all – especially since most were crazy drunk and acting like imbeciles. Way to represent.

Salif Keita started playing at midnight. I was on the far right – near the river with a mediocre view of the stage. Unfortunately the sound was not especially good were we were, and everyone was talking, so it could be hard to hear. Everyone loved his performance, and the crowd sang along to all his songs. By the way, did I mention that we met Salif Keita? He and Cherif grew up together, and I think that Cherif is the only person in the world who can get/command him to do things. So, he asked Salif to come down and watch the film with us in Nana Kenieba, and he did it! He didn’t end up watching the film – he just hopped out of the car for a few minutes, chatted with Cherif, introduced himself and got all our names, and then went back. It was crazy cool to shake his hand, and I was kinda shell-shocked for the rest of the night. Anyways, he gave a good show, and it was very cool to see him in concert.

Salif finished playing around 1:00 and people began setting up for Habib Koité, who’d be the closing act for the night. A couple of friends and I decided to try to get closer, and made our way in the crowd right in front of the stage. It was packed, hotter and sweatier, but the crowd was also energetic, the sound was much better and I had a great view of Habib playing. We actually throughout the performance pushed closer and ended up directly in front of the stage at the water’s edge (this was facilitated by the fact that a bunch of people left). The performance was superb, he was dynamic and engaging and his music was wonderful. I was transfixed the entire time and danced a ton. It was a great ending to the festival, and although (once again) I didn’t end up asleep until close to 5, it was well worth it.

Leaving Segou the next morning was hard. For a number of reasons, I’ve fixed on to the city, and I was really sad to leave. After two magical nights as well as some great encounters with musicians, I was very reluctant to head out. Moreover, Oumar is always so accommodating that I don’t want to leave his beautiful hotel and wonderful person. I nearly cried in the car as we drove out – this probably had more to do with my lack of sleep than anything, but I also know that when I return to Mali, I will have to come back here.